Media Panel at the 2019 national Social Cohesion and Inclusion conference

Role of media in society

The Australia Baha’i Community appreciates that the media, in all its forms, is a powerful force which shapes public perception, social discourse and how society comes to understand itself.

Inspired by a vision for a more peaceful, just and harmonious society, we seek to advance thought about the media’s role in strengthening our social ties and its capacity to help overcome prejudice, inform and educate, and contribute to social progress.

In His Writings, Baha’u’llah, the Prophet-Founder of the Baha’i Faith, refers to the media as an “amazing and potent phenomenon” describing it as a “mirror endowed with hearing, sight and speech.” He urged journalists to “inquire into situations as much as possible and ascertain the facts, then set them down in writing.”

We consider the conversation on the role of the media as a shared undertaking which benefits from the input of individuals, communities and social institutions, working cooperatively and with reciprocity for the common good.

It is hoped that over time, a body of knowledge can be developed together with those interested in this area of enquiry for the collective benefit of everyone.

Read the Australian Baha’i Community’s submission to the Senate Inquiry into the state of media diversity, independence and reliability in Australia.

Among the concepts we are interested to explore are: 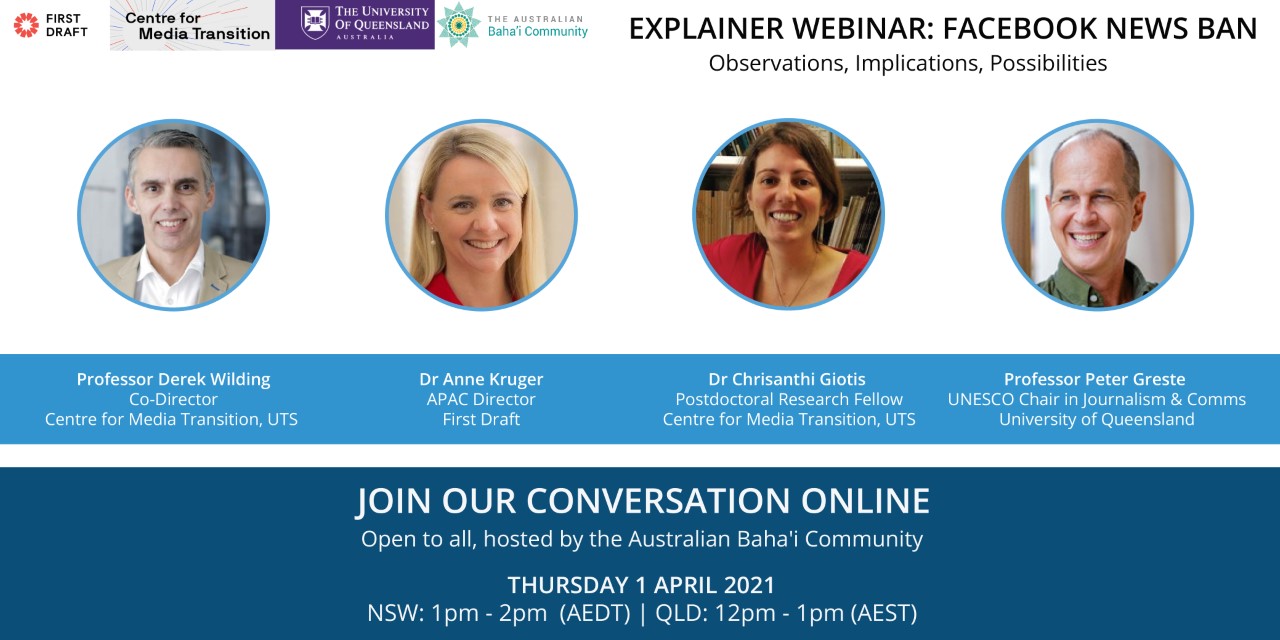 On 1 April 2021, as a springboard to the deeper conversation on the role of the media in society, we will be exploring the recent Facebook news ban in conversation with media practitioners who are at the forefront of thinking about the intersection of technology, communications and the media.

Lending their insights and experiences are:

As part of an ongoing series, we have also developed a joint initiative with the Centre for Media Transition and First Draft through a space designed for collective dialogue and reflection. In an ongoing way, journalists and media practitioners explore thought together in contributing to “reimagining” the Australian media landscape. This effort, alongside those from other national communities around the world, was highlighted during a newsclip by BWNS which focused on journalism during the covid-19 pandemic.