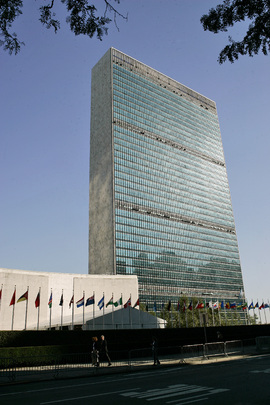 Australian Baha’is have welcomed the resolution on human rights in Iran adopted this week by the United Nations General Assembly, in which it called on Iran to release prisoners unjustly jailed.

The resolution, adopted on 19 December 2017, expressed concern over a range of human rights abuses and specifically about Iran’s persecution of the Baha’is, the country’s largest non-Muslim religious minority, highlighting economic and educational discrimination.

More than 90 Baha’is are in prison because of their religious beliefs.

Australia Baha’i spokesperson Natalie Mobini said it was pleasing to see Australia among the 43 co-sponsors of the resolution and that the no vote was the lowest in the past six years. This was the 30th such resolution passed since 1985.

“The resolution passed by a vote of 81 in favour and 30 against, with 70 abstentions.

“We are very grateful to our Government, our Foreign Minister and her departmental officials, and our UN representatives for standing up for the Baha’is of Iran and the other Iranians whose human rights have been so severely and unjustly abused.

“Among the members of the Baha’i Community in Australia there are people who have been persecuted in Iran or have relatives still suffering there, so it is good for them to know that the General Assembly has recognised and condemned this systematic State-directed oppression.”

The resolution follows a report by the UN Special Rapporteur on human rights in Iran, Asma Jahangir, who listed a broad range of rights violations by Iran.

Ms Jahangir highlighted the situation of Iranian Baha’is, noting that “members of the Baha’i community have continued to suffer multiple violations of their human rights”.

In particular, she called attention to the case of Farhang Amiri, a Baha’i who was stabbed to death in September 2016 and whose confessed killers were swiftly released on bail.

“Despite the fact that they have been documented for years, these violations continue unabated and with full impunity, as shown by the release of the murderer of a Baha’i,” she said, referring to Mr Amiri.

Ms Jahangir’s report also noted that “thousands of Baha’is have been expelled from their jobs, with their pensions having been terminated, and have been banned from employment in the public sector.

“Companies are pressured to dismiss Baha’i employees, banks are forced to block the accounts of Baha’i clients, and Baha’i business licenses are not issued, not extended, or deliberately delayed.”

Ms Jahangir also cited “serious human rights challenges” including “the arbitrary detention and prosecution of individuals for their legitimate exercise of a broad range of rights; the persecution of human rights defenders, journalists, students, trade union leaders, and artists; a high level of executions, including of juvenile offenders; the use of torture and ill-treatment; widespread violations of the right to a fair trial and due process of law, especially before revolutionary courts; and a high level of discrimination against women and religious and ethnic minorities.”

UN Secretary General Antonio Guterres has also expressed serious concern to the General Assembly this year about a wide range of human rights violations by Iran.